We are interested in understanding how microbes impact the behavior of host animals. Animal nervous systems likely evolved in environments richly surrounded by microbes, yet the impact of bacteria on nervous system function has been relatively under-studied. A challenge has been to identify systems in which both host and microbe are amenable to genetic manipulation, and which enable high-throughput behavioral screening in response to defined and naturalistic conditions. 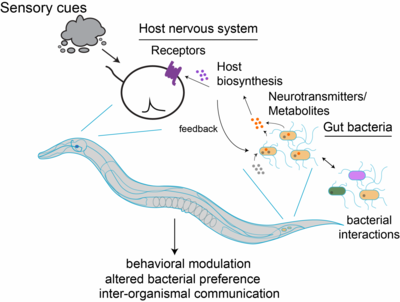 To accomplish these goals, we use an animal host — the roundworm C. elegans, which feeds on bacteria — in combination with its natural gut microbiome to identify inter-organismal signals driving host-microbe interactions and decision-making. C. elegans has some of the most extensive molecular, neurobiological and genetic tools of any multicellular eukaryote, and, coupled with the ease of gnotobiotic culture in these worms, represents a highly attractive system in which to study microbial influence on host behavior.

Using this system, we discovered that commensal bacterial metabolites directly modulate nervous system function of their host. For example, beneficial gut microbes of the genus Providencia produce the neuromodulator tyramine in the C. elegans intestine. Using a combination of behavioral analysis, neurogenetics, metabolomics and bacterial genetics we established that bacterially produced tyramine is converted to octopamine in C. elegans, which acts directly in sensory neurons to reduce odor aversion and increase sensory preference for Providencia.

Because food choices and social behaviors rely on chemosensory input, we think that these types of sensory modulation may increase or decrease association of C. elegans with microbes, altering the availability of this nutrient-rich food sources for the worm and its progeny, while impacting dispersal of bacteria. 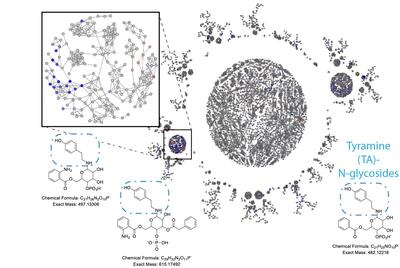 We have also found that natural products produced by nematodes and their associate bacteria arise from joint metabolic processes, generating novel compounds with diverse physiological effects. We collaborate with chemists to identify and manipulate the production of these natural products, and determine the effects of these compounds on the behavior and physiology of animal hosts.